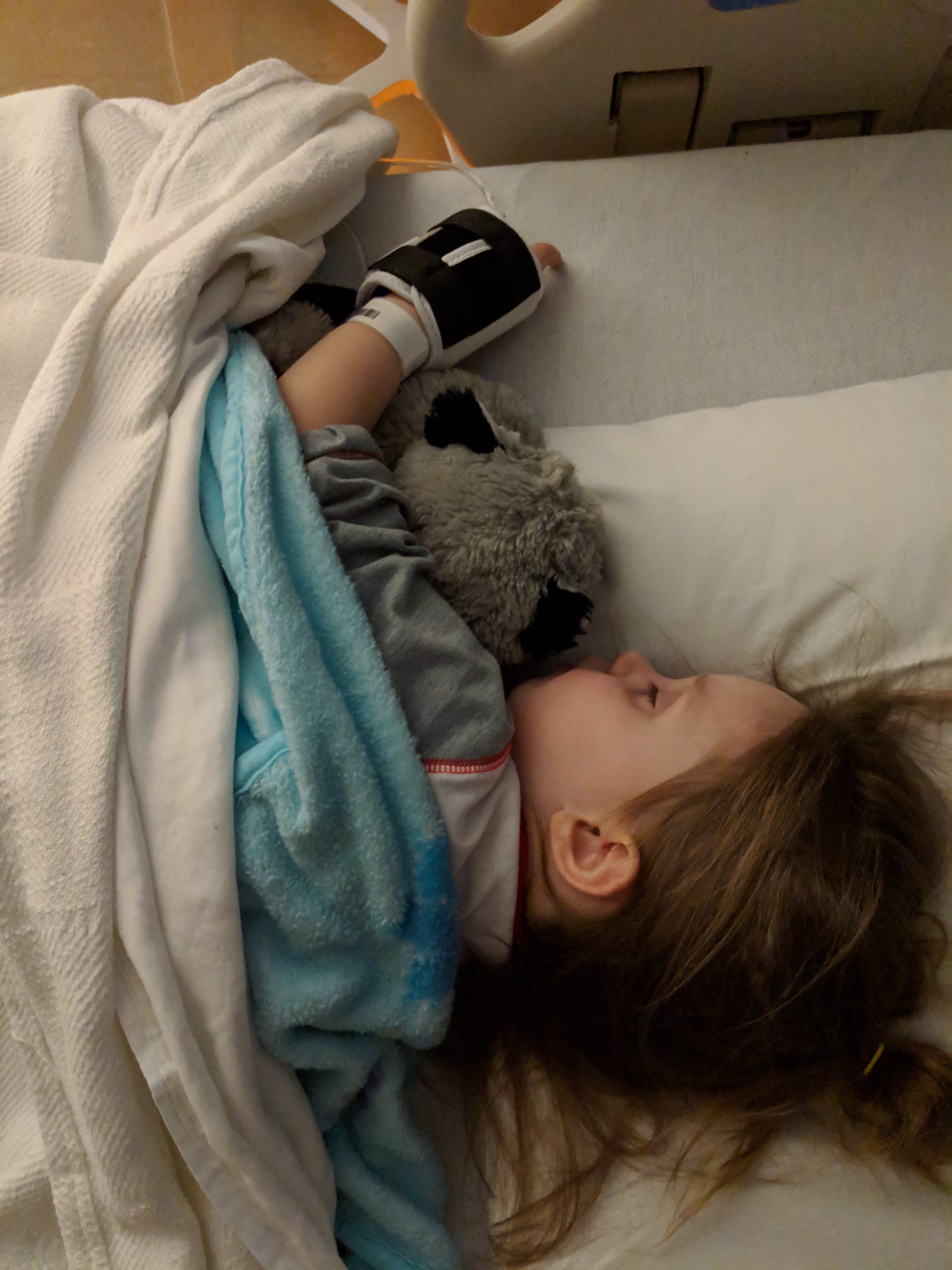 The day before Christmas 2018 our daughter began acting differently. She was tired for most of the day, slept on and off and seemed cranky. We thought that she was cranky due to the three hour travel to her grandparents house and tired from playing with her cousins so much.

Christmas morning I noticed that her lips seemed chapped. I put some Burt's Bees on her and continued our busy day. That evening she had the beginning of a small rash on her groin. I chalked it up to heat rash due to wearing Christmas tights all day.

The next day, her grandfather took her outside to ride her new "Elsa Frozen" bike. He brought her back inside shortly after saying she felt warm and wouldn't play. We took her temperature and it was 102.8, I called her pediatrician and set up an appointment for the following morning. They told me give her some Tylenol and to head to the E.R. if her temperature didn't come down within the hour. With the medication she stayed around 100.5-101.

Her father took her to the pediatrician the next day. They noted a red rash all over her torso, groin and back as well as cracked peeling chapped lips. They tested her for strep. It came back negative. They gave a steroid cream for the rash and diagnosed her with a viral infection. We were told to alternate fever reducer as needed and to contact them if she still had fever in three days.

Three days came. She still had a fever. The rash was now contained to her groin and bottom but her lips were terrible, spreading to the area around her mouth and cheeks. She was tired all the time, took naps constantly or just wanted to lay around and watch cartoons. Every now and then her fever would spike to 102 but we kept alternating her fever reducers.

Her pediatrician noted the rash looked better but Brielle seemed worse. They tested her for strep again thinking that maybe she had scarlet fever. The test came back negative so they diagnosed her with a bacterial tonsillitis and gave us some antibiotics. If she wasn't better in three days, come back they said.

The day after her antibiotics, our daughter's eyes became bloodshot. I called and asked if it could be a reaction to the medication but was told to keep giving the medication and that sometimes if it was a viral infection it could affect her eyes. Her rash and lips were seemingly getting better but her fever wouldn't break and she was sleeping all the time. I was beginning to get very concerned by this point.

Three days after the antibiotics and she still had consistent fever. Her rash would come and go, as well as her chapped lips. At this point she was complaining of joint pain, saying "Mommy my legs hurt I don't want to walk." Everything made her grumpy; baths, moving from the bed to the couch, being hungry, being full, noise being too loud etc.

Our daughter is usually happy and very active so we made another appointment to see the doctor.

That evening she started vomiting. We had the first appointment the next morning and hurried to the office. She was tested for the flu before we were sent to OU Children's Hospital for what we were told could be Kawasaki Disease. Our family was told to pack overnight bags for ourselves and for our daughter and to go straight away to the E.R. to be admitted by the infectious disease doctor on call that day.

When we came in through the E.R., we were first approached by the doctor on the floor and told to wait while the ran a panel for common illnesses. Four hours later they returned to tell us she had the "common cold".

At this point she was on fluids, barely walking every few hours and still running temperature.

I lost it. As a mother I demanded to see the "Infectious Disease Doctor our pediatrician called ahead for us to see!" I started crying and begging the E.R. to contact our doctor because Brielle had been sick for going on ten days and getting worse.

A few minutes later we were met by a different doctor, "Kawasaki Specialist" as he called himself. He introduced himself and took a peek at our daughter. Her temperature was 101 plus on fever reducer given by the E.R. staff, she had some rash (but asked to see pictures of what it looked like at it's worst). I showed him the rash and what her lips had looked like from my phone. He took a look at her bloodshot eyes and checked her hands and feet. At this point they were not peeling but her feet started to peel the next day and then they peeled for two to three weeks afterwards. Our daughter then threw up and he admitted her to the Children's Hospital for Atypical Kawasaki's Disease.

The next morning after a round of fluid, liquid antibiotics and careful observation she saw a cardiologist. She was diagnosed with swelling of vessels. They also checked her liver and kidneys at this point.

We were frightened and stressed as a family.

By mid-morning the Infectious Disease Doctor came in to examine her and noticed straight away that her feet and toes had started peeling. He immediately changed her diagnosis from Atypical Kawasaki to Kawasaki and we began treatment that evening.

Due to the swelling in the vessels around her heart our daughter stayed on aspirin for twelve extra weeks. It will be six months since her diagnosis this July and she is set to see her cardiologist for the third time being released from the Children's Hospital, where we stayed for seven days. She received a full round of Gamma globulin and almost a second due to having caught the disease later in its cycle. However she responded well to the first round and was monitored on high dose aspirin for two full days. If her appointment goes well then she will see a cardiologist once a year until she is 13.

We were extremely lucky that more damage wasn't done and very fortunate to receive treatment right away once it was diagnosed.

First tested for Strep and told it was a viral infection
Then tested for Scarlet Fever
Treated as Bacterial Tonsillitis
At Children's Hospital E.R. told she had the common cold