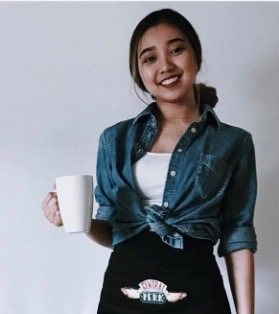 D1- She complained of a pain on her neck which at first we associated with her position while using her laptop. She developed a fever that night.

D2- We brought her for bloodworks the very next day fearing it was dengue (this is another fatal disease common in the Phils. The doctor checked her results, we explained she had neck pain & fever. The doctor tried touching her neck but it was too painful for my daughter. Pediatrician said my daughter was "overreacting" & waived it off as an infection and prescribed antibiotics. That night she developed rashes on her stomach.

D3- We went for a second opinion, the new pediatrician told us to stop the antibiotics,she examined my daughter & the result of her bloodworks. She said there is definitely an infection but at that point it doesn't look like dengue. She gave us medicine for her fever & rashes. She said to come back if any new symptoms arise.

D4- During the night I noted her eyes were bloodshot & her tongue had this weird strawberry-like texture. I asked her if she felt anything different or painful, she said No. I googled her symptoms & sometimes Kawasaki Disease would come up, but since I don't know anyone that had this disease,I wasn't sure about what is happening to my daughter

)She had little or no appetite and looked weak & a bit yellow. We brought her back to the pediatrician, she said to immediately proceed to the nearest hospital. She will have her admitted either due to dengue virus or kawasaki disease, she said she hopes it was the former than the latter. Upon admission to the hospital, my daughter was sitting up & using her laptop, a nurse came by & tried to get her blood pressure, she tried several times switching from one arm to another. She left & came back with a doctor who also tried to get my daughter's blood pressure, the doctor also tried several times, at this point I was genuinely worried and felt something was not right. After an hour, her pediatrician shows up, wearing house clothes and tried to take her blood pressure. She talked to me & my husband outside & said that my daughter's blood pressure is dangerously low. She said she definitely has Kawasaki Disease and needed to moved to the ICU. Within a couple of hours, my daughter's condition worsened. Her bp plummeted, her heart rate is like she was running a marathon, her liver was affected, she had water in her lungs. A Cardiologist & Immunologists were checking her symptoms & vitals. We were told that the disease was attacking all her blood vessels and targetting her organs. At that time it has yet to reach her kidneys & her heart. The doctor said her only chance was to undergo IVIG treatments. They told us it was quite costly but this was the best way to treat our daughter. We don't know where we will get the money, but we know we will do everything to help our daughter. They needed to get her weight but could not weigh my daughter as her whole body was in pain. Even the slightest touch on her skin was unbearable. She also developed a large coronary aneurysm in her artery. The doctors relied on her previous weight on record. They gave her 11 bottles of IVIG, which in our country costs around the same amount as a low-cost house. After giving her the medicine, we asked when we can see any improvement, but the doctor replied that her case is quite unique and she is very critical at that point & all we can do is pray

. She showed some improvement in the next couple of days in the ICU

We had her transferred via ambulance to another hospital as our current hospital bill can buy another house. While in the ambulance, her bp plummetted once more but was quickly recovered by her internist who rode with us to the other hospital. She was admitted to the ICU, bit after a week, she was showing symptoms of the disease once more. The doctors decided she needed either another round of IVIG or steroids. They said steroids are also acceptable & half the price. So we opted for the steroid treatment. She had two steroid treatments.


After a month in the ICU, one month in a regular room we were sent home. Prior to discharge,my daughter was complaining of joint pains. Her doctor said that it was just because she was bedridden for a long time. At home, her condition worsened, she couldn't get up by herself, all her joints were in pain. She had to use a bed pan as she could not get up to go to the bathroom.

She was readmitted and puzzled her doctors. She was given another round of steroids and was also being treated for juvenile arthritis, for another 2 weeks in the hospital. She took steroids for 3 months. She was constantly monitored with 2D echos. Cardiologist said she only had 1 more coronary aneurysm.

Upon migrating to Canada, cardiologist thoroughly checked her condition and found at least 5 coronary aneurysms on her left & right arteries. As she is now an adult, pregnancy should not be taken lightly and has to be coordinated with her doctors (if at all worth the risk)

Initial treatment with antibiotics to treat an infection. One specialist was also thinking that she probably didn't have Kawasaki Disease and only had Juvenile Arthritis.

She is on warfarin & plavix. She still has mutiple coronary aneurysms and annually sees a cardiologist & has monthly INR bloodworks. She us finishing college & currently working as a server in a restaurant here in Winnipeg,MB,Canada

We thought we were gonna lose her. Doctors said she didn't fit the "profile" for Kawasaki Disease & her complications were also something new to them which made her diagnosis more difficult. We want to help spread awareness so more parents can recognize the symptoms sooner. We are currently residing in Winnipeg,Canada and we would love to contribute any hair samples for any research that could help determine what actually causes Kawasaki Disease and to pinpoint kids who are at higher risk. Thank you so much.