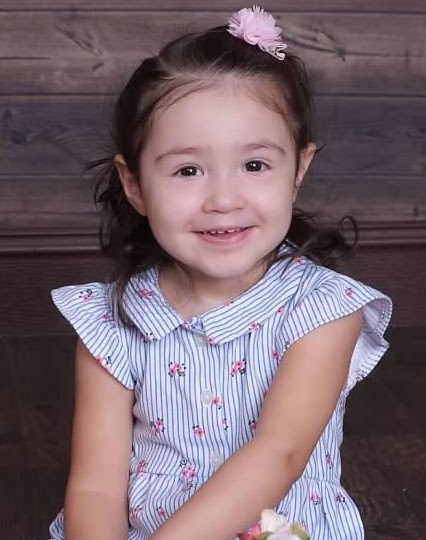 Our daughter Jocelyn was 23 months old at the time she was diagnosed. We had taken her to the doctor's office a few days before as she had a fever that we could not get down, and it was determined she had an ear infection. They prescribed her with Amoxicillin to cure the infection. She took the first dose just fine but after taking half of her second dose she vomited quite a bit. We didn't think too much of it yet, until the next morning during breakfast when she threw up again. We decided to call the doctor and make another appointment, as we weren't sure if she was throwing up because of the Amoxicillin or another reason. We gave her a bath and afterward noticed that she was developing a rash in her diaper area. That had us even more concerned and glad that we had made the doctor appointment. The physician assistant who saw her said that there was a chance she could have mono but also said she could be having an allergic reaction to the Amoxicillin. She changed her antibiotic and said she would follow up with us tomorrow to see how she was doing. Jocelyn was able to take the new medication without throwing up but after a whole day of rest and medicine she was not feeling any better, her fever was still high, and now she had developed sores in the back of her throat. We called the doctor's office again to see what they recommend and the nurse we spoke to said we should take her to the nearby urgent care to get checked out because she may have thrush, along with being dehydrated from a lack of appetite.

At urgent care they gave her an IV to make sure she was getting hydrated. After evaluating her they determined it would be best to transport her to the local children's hospital. The doctors there thought that she could possibly have mono as well, but also brought up the possibility of her having Kawasaki Disease. This is the first time we had ever heard of this disease and were concerned that it was life threatening. The doctors told us it could have an effect on her heart if she's had it for 10 days or more, so they admitted her to the hospital for further testing. Thankfully her echo test came back normal, but there were highly confident that it was Kawasaki Disease that she was dealing with. They gave her an IVIG treatment and said they would need to see how she was doing 48 hours after it completes to see if she needs further treatment. At the 48 hour mark she was still having fevers of 102 so they felt another IVIG treatment was needed. After 48 hours from that one, she was still having fevers of 101. They decided that an IV of Remicade was the next best step to take. After another 48 hour period, her fever was finally stable at 98 and below. We were so relieved that after a week in the hospital they were finally going to discharge her! They did another echo and kidney ultrasound and found nothing of concern.

The hardest part of this experience was having to watch poor Jocelyn go through all the testing, poking and prodding and how it has effected her. She is definitely not the same happy and energetic little girl we had before this disease, but over time we are hoping she will return to herself. We are very lucky we were able to treat KD on time, and our main focus now is to help our baby girl regain her health!