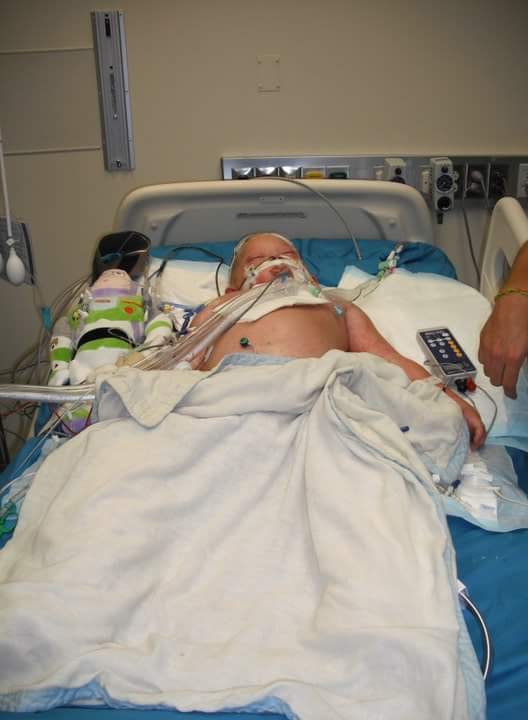 We were at my sister in laws enjoying the beach before school. On the morning of August 1, 2010 Peyton woke up with a mild fever. Since he had just gotten home from his father's I assumed he picked up a bug. We decided to cut the trip short and head home to the doctor.

This is where the nightmare began. First it was a suspected ear infection. So off to get meds. As we wait he starts to for a rash. I call the doctor back and he said oh it probably strep. The next day fever is up to 103 so back to the doctor because nothing will touch his fever. The next day it's pink eye. That night his temp went up to 105 the er doc who never looked at him said chickenpox. Ok! I go back to his doc and see the P.A. SHE WAS THE FIRST TO SAY KAWASAKI DISEASE. Told us to drive to children's hospital now so we did. They said Rocky mountain spotted fever nor antibiotics. Now at this point fever has not gone down at all he couldn't walk due to pain. The next morning we wake up to a god awful sound and his fever was 106.7! Yes you read that right. We called 911 in the car and said I was on my way to the Dr and was not stopping for anything they could give me a ticket later. Mama bear in full force storms past nurses and security and had my boy to the Dr doc. Within 1 min lines were started and ambulance the to get him to transfer him.
Fast forward to the middle of the night on day 9 he gained 10 pounds in fluid retention and every nurse, doc, and flight team member was in his room yelling mom out of bed. We had no clue he was crashing and fast. He was finally stable enough to move to icu after 5 hours.

For this point it is all a blur for the most part. We were in bed snuggling watching Wow Wow Wubzy. He said momma I can hear Wubzy but I can't see him. We run and grab the team and the see there is swelling in his brain and crushing his optic nerves. His o2 stats were falling fast so the decided to out him on life support. The last thing be said was momma daddy Jonathan I love you. We didn't hear him speak for over a month. After intubation they had to put him in. Medically induced coma. The normal vent no longer eroked9 for him. We tried the oscillator and eventually need up on ecmo. After going into multi symptom organ failure heart sings kidneys it was time to call in the family. You see he had 3 rounds of IVIG it didn't work. A doctor who nobody at the hosoitsl in all white haor and all came in and said he bad Kawasaki shock syndrome and rocky mountain spotted fever. He said do cytoxan and steroids. Within a week he did a complete 180. After a.few.weesks we were transferred. To in patient rehabilitation. He noe has 4 aneurysms and a brain injury but you would never know