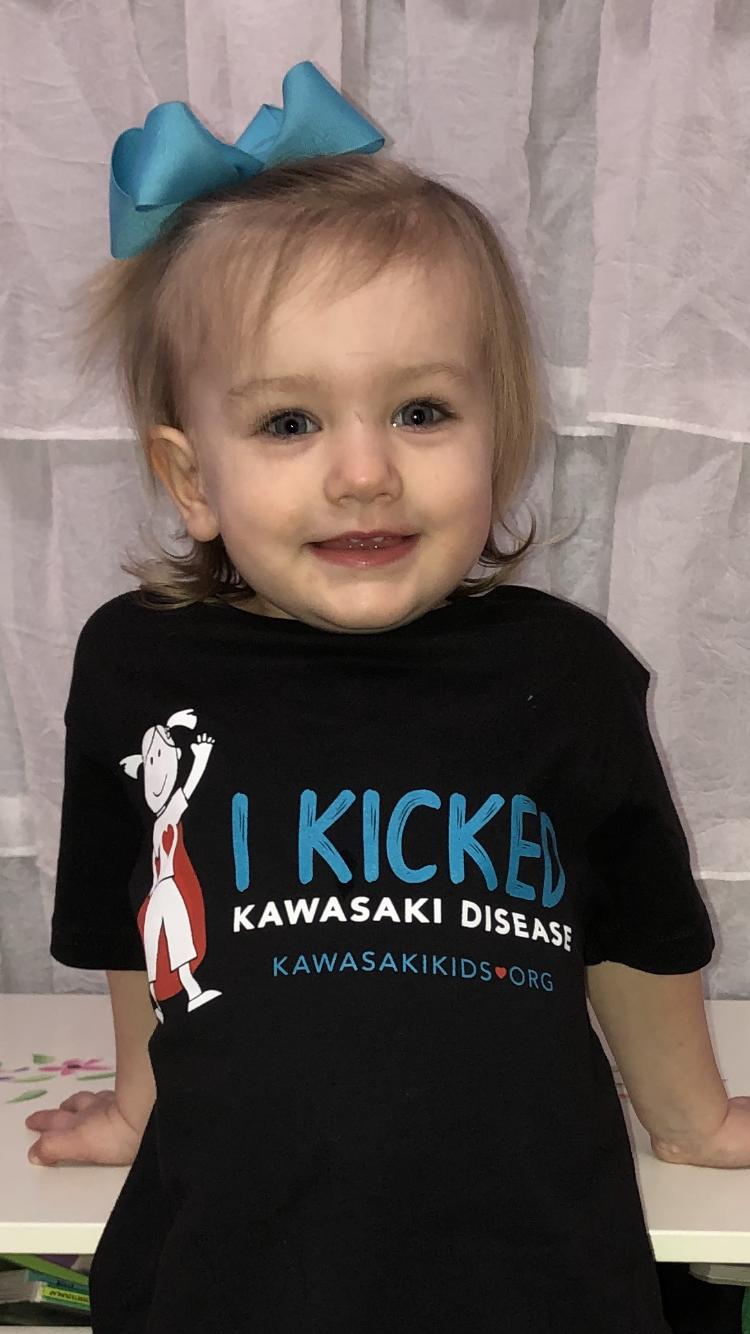 Anniston’s Kawasaki Disease story started on Tuesday, 12/10/19. Our usually energetic one year old slept a lot that day. We thought that was strange but thought maybe she was just growing and needed some extra sleep. Wednesday morning around 4 am, I woke up to her crying in her crib. I went to check on her and she felt soooo hot! She had on fleece pajamas so I thought maybe those had made her hot. Her temperature was 102 degrees so we gave her Tylenol. I took her to the doctor later that day on Wednesday and her pediatrician said it was probably something viral and to let it run it’s course. We took her back home where she continued to just lay around, sleep, vomit, and run high fevers. On Thursday, she was still running high fevers of 103 and still puking. I called her pediatrician back and he said to bring her in. When we got to the pediatrician, even though she had Tylenol, her temperature was 104.5. Her eyes were red. She wasn’t hardly eating and drinking anything. She tested negative for flu and strep. Her pediatrician ordered a respiratory panel and asked if she had been around cats (maybe even suspecting cat scratch fever.) One of her lymph nodes were huge! It was a few centimeters. Her pediatrician also ordered blood work. We finished all of this, her temperature came down with a suppository, and he sent us home until the tests came back. We had only left his office for about an hour before he called and told us he was admitting Anniston. We got all of our overnight things and headed back to our small local hospital. She continued to run high fevers up to 105, developed a rash, and had red eyes. By Sunday, she still wasn’t any better. Her pediatrician decided to transfer her to a larger children’s hospital. He told us he suspected Kawasaki Disease. We waited on an ambulance all of Sunday night and finally got transferred to a large children’s hospital that was four hours away so that Anniston could be treated for possible Kawasaki Disease. By this time her symptoms were high fevers up to 105 degrees, swollen lymph node, rashes that were coming and going, red eyes, red lips, strawberry tongue, and decrease in appetite. She was also sleeping a lot. At the children’s hospital, they informed us she for sure had Kawasaki’s Disease. She was treated with IVIG right away. She had an echo and EKG that came back clear. Her fevers stopped after the 16 hour treatment. We were released to go home on aspirin. Thankfully, when we went back for our follow up appointments, there was no change in her heart.

Her pediatrician remained open to different diagnoses. He thought possibly viral or a UTI until urine culture came back good. He suspected Kawasaki Disease although we did not get a for sure diagnosis until day 6.

Anniston is doing great now! She is finally back to her old self!