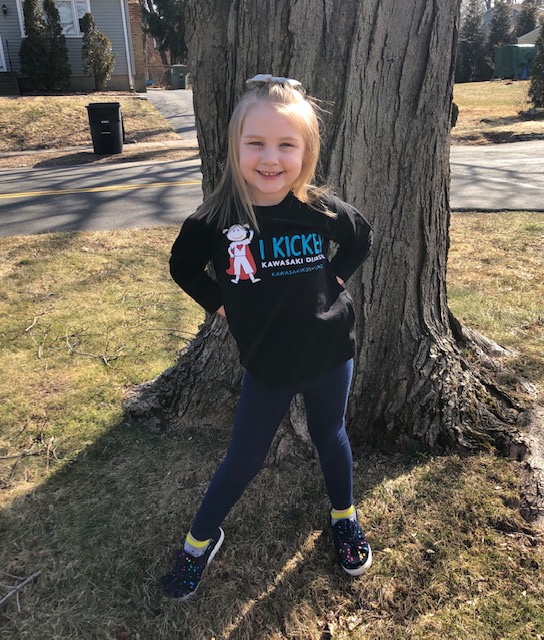 Avery woke up with a fever and vomiting on Monday Dec 23,2019. At first we thought it was a stomach bug going around that presented with the same symptoms. The next day she was still running the high 104 degree fever that did not go down with Motrin or Tylenol. By Wednesday- Christmas Day she started exhibiting cold/flu like symptoms-Tired, lethargic, refusing to open her Christmas presents -just wanted to sleep and still running low 103-high 104 fever. The next day was her first pediatrician appointment. At this point the last meal she had eaten was Monday night. Her flu and strep test came back negative even though her throat looked “angry” we were advised to keep pushing fluids and rotating Tylenol/Motrin and to call if there were any other changes. By Saturday evening she still was not any better, still running consistent fever, had not eaten anything since Monday night, and as a parent I was now concerned. I called and spoke with the pediatrician who was also equally concerned and requested to see her first thing Sunday morning. At midnight she woke up vomiting which she had not done since Thursday evening and prior to that was Monday evening. When we put her in the tub to clean her up we noticed a rash all over her body including her groin areas. We saw the pediatrician the next morning and he repeated both flu and strep thinking maybe it too early the last round of tests on Thursday. They both unfortunately came back negative-when he came into the exam room to give us the results he looked at her and saw the rash on her hands. Because it was winter in New England she was in fleece footed pjs and he had rushed to do the tests as soon as we arrived without examining her since we all assumed at that point they would be positive. He questioned the rash and we filled him in that it was all over her body. He checked her mouth and declared she needed to go to the ER immediately that he was pretty sure she had Kawasaki Disease. We as parents had never heard of this but followed instructions and left to go to the ER. Yale Children’s Hospital was waiting for us to arrive and immediately started testing her-IV drip, fever dropped to 100.7 at arrival but spiked back up to 103, EKG, and bloodwork was done. We were admitted within 3 hours of arriving and from admission we spent 4 total days in the hospital. They started an IVIG treatment Sunday night but came in to stop it within 30 minutes of starting as her virus panel came back positive for Adenovirus which can mimic Kawasaki symptoms. The next morning she was ordered an echocardiogram by cardiology which showed a heart valve borderline enlarged and was seen by Rhumetology who advised her inflammatory markers were elevated. Her team of doctors decided to stick with the Kawasaki diagnosis since new research had confirmed you could have both Adenovirus and Kawasaki Disease at the same time and we were on day 8 of a 10 day window to treat. She was given the IVIG treatment on Monday afternoon on a 12 hour drip. Tuesday morning about 7 hours after finishing treatment she spiked a fever and started vomiting which can be a side effect of the treatment-it is one you hope you don’t get. So we had to stay an extra day as she needed to be monitored. She luckily turned around after that and by Wednesday morning she was like a new kid and was ready to be discharged on New Years Day! She was so excited to go home and open her Christmas presents which were still waiting for her under the tree. Her 2 week follow up appointment with cardiology showed her heart valves all within normal range -YAY the treatment worked! Her 8 week appointment showed them still in normal range and her bloodwork showed her inflammatory markers were back to normal so we were cleared off of the daily aspirin. We were able to be released from cardiology with no restrictions until her 1 year follow up appointment scheduled for Dec 2020-as long as she doesn’t show any relapse symptoms. We were very lucky we have such a good pediatrician and team of specialists that caught and diagnosed on day 7, she could be treated on day 8 and recover with zero permanent damage to her heart.

Her virus panel came back positive for adenovirus so they initially stopped treatment on day 7 (Sunday)as it exhibits similar symptoms to Kawasaki. Once she was reviewed by cardiology and rhumetology the next day her team of drs felt she fit enough symptoms to be treated for Kawasaki and new research has shown you can have both adenovirus and Kawasaki Disease and they did not want to surpass the 10 day window with an incorrect diagnosis so she was treated on day 8

Currently cleared without restrictions until 1 year follow up Dec 2020