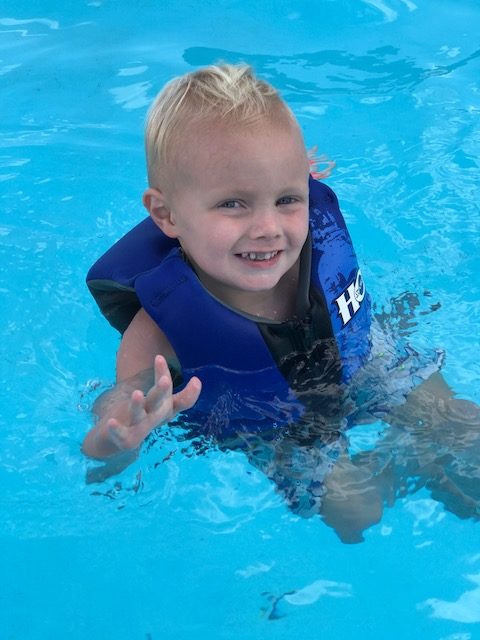 When Ike was 11 months old, he had a high fever and wasn't eating well. We took him to the doctor, who said he had a virus. A couple of days later, I brought him back to the doctor because he wasn't eating or drinking at all. They sent me home again, and I brought him back a third time. Then they finally realized the seriousness of the situation and how dehydrated he was. They checked him into the hospital where he received IV's, antibiotics, and a bunch of tests. It was about that time that a rash appeared all over his face and it peeled and flaked off everywhere. It didn't matter how much lotion I put on him, I was constantly wiping and blowing flakes out of his eyes and eye lashes. After a couple of days of watching him get worse, I had this overwhelming feeling that he needed help and that he wasn't getting the help he desperately needed. I called his doctor around midnight that night and told him that I was taking him to a different hospital where he could see some pediatric specialists. He was supportive and called the other hospital to let them know that we were on our way. We saw an infectious disease doctor within a few hours of arriving. He mentioned Kawasaki Disease, but was perplexed that he was only showing a few of the symptoms. They like them to show more in order to make a good diagnosis. After waiting a couple of days, and ruling out other possibilities, they gave him the IVIG treatment for Kawasaki Disease. This was on day 9, so we barely made it into that crucial 10 day treatment window. The next morning when he woke up, his face looked perfect and he started eating a little on his own. He still had a slight fever, but overall was soooo much better. Luckily, for us, Ike does not have any heart damage. I'm sooo unbelievably grateful that we were able to get a treatment and diagnosis for him before it was too late. Always listen to your instincts!! You are your child's best advocate and you know when something doesn't seem right. It's ok to make demands for their welfare!

They told me it was just a virus. I took him back three times within four days before they finally decided that it was more serious that they originally thought.

He is very healthy! No side effects!