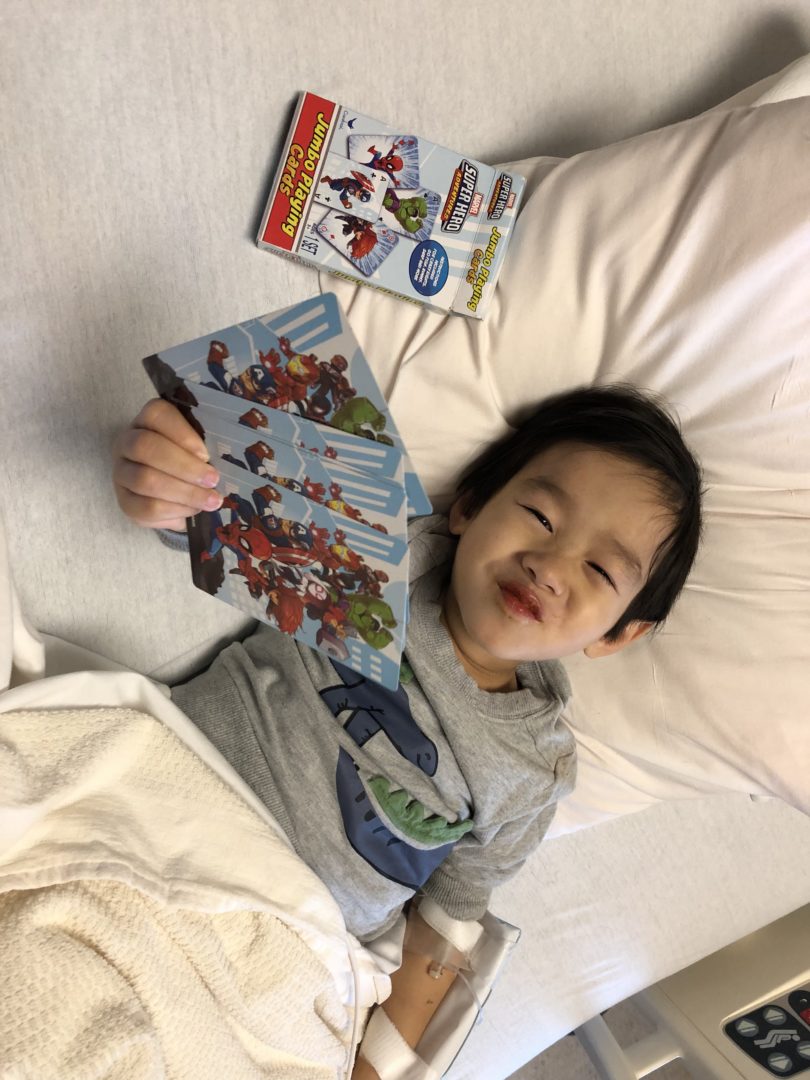 It all started on April 3rd, 2019. We were called to pick up my four year old son, Jakey from daycare for low-grade fever and vomiting. We decided at that point just to keep him hydrated and medicate with Tylenol to help control the fevers. We took him to the pediatrician on Tuesday, April 9th to make sure he was okay to travel the next day since we would be leaving to Cabo San Lucas for Spring Break. He was still having low-grade fevers at that point. We were told to pack Children's Tylenol, Motrin and Benadryl.

We arrived in Cabo on April 10th. He did okay the first couple of days. He had low-grade fevers and I had to medicate around the clock to try to control the fevers. He started to get progressively worse. He became really lethargic, did not have an appetite, fevers went to 102 and he developed an enlarged lymph node on the left side of his neck. I contacted his pediatrician back home and sent a picture of the lymph node along with a list of his symptoms. I was advised to see a local doctor. We took him to the resort doctor that told us he may have mumps. I told the doctor that he was up to date with all of his vaccines. Her reply was that vaccines are not 100% effective and that we would need to get lab tests. Going off the resort in a foreign country was something we were very hesitant in doing.

We were scheduled to fly home the next day. We made an appointment for him to be seen the day after we got back. When we landed, my son was not the same loving, easy going boy we knew. He was extremely irritable and had a hard time walking through customs. I later learned that Kawasaki's Disease can cause joint pain. I called the nursing advice to line to ask if we should take him to the ED or wait until his appointment the following day. I was advised to wait until the appointment as long as his fevers were controlled with medication. By that time, his lips were bloody and cracked.

The pediatrician evaluated him the following day and advised us that we needed to take him to the ED for further evaluation. In the ED we were told, that it was probably strep throat. The doctor ordered Amoxicillin and we were told to have a close follow-up with Pediatrics within 24 hours. While the Amoxicillin was given, I mentioned to the nurse that my son had a diffuse body rash not caused by the administration of the antibiotic. The nurse called the doctor to come back in. At that time, the doctor called the Pediatrician on the phone and said the appearance of the rash changed everything and now they would have to get labs and place an IV. His feet and hands were swollen by the time the Pediatrician came to see him in the emergency room. The diagnosis was then given since he meet the majority of the criteria for the Kawasaki diagnosis.

We were admitted and IVIG was started once the diagnose was made. My son had been so irritable and uncomfortable for so long. Shortly after the IVIG was given, he started to get better. We were told to return if he had fevers greater that 100.4. We were discharged on April 19th.

When we returned home, he was still very, very tired and would sleep about sixteen hours a day. He would get up to eat and would say that he was tired. His fever returned on April 24th. He had a temperature of 101.4. We took him back to the emergency room and he was re-admitted for Refractory Kawasaki Disease and given as second dose of IVIG. We were told some kids needs a second dose if they do not fully respond to the first dose. We were discharged on April 26th with the same set of instructions to come back if he had fevers greater than 100.4 within 7-10 days. Patients are generally discharged 48 hours post-infusion if the patient is fever free.

We returned to the ED that same evening when his fever returned for a third hospital admission. This time he was admitted to the Pediatric ICU. They ran so many different blood tests, urine tests, stool tests and took swabs to rule out any other sources of possible infection. My son was put on isolation precaution at that point. All tests came back negative and we were told that this was probably related to the Kawasaki's Disease. If the IVIG was not fully effective, we were told that the next line of treatment is Remicade. My son was given Remicade and we were discharged on May 1st.

We took him home and we thought he was finally cured since he was back to his normal self. This was short lived. His fever returned on May 5th. We reluctantly took him back to the ED. By that time, my son was traumatized by all the needles, IV's and the hospital. We never left his side and we didn't know if the treatment plan was working. At one point in the hospital my son stated,"I think I'm going to die!" It was such a traumatic experience for him. We were told when we were admitted for the fourth time that it may be serum sickness caused by all the medications given to him. The fourth line of treatment for Kawasaki's Disease is IV steroids. My son was given IV steroids and was discharged on May 7th, 2019. He had to taper off of steroids for the following three weeks. We saw a Rheumatologist and a Cardiologist and so far so good. He is still on daily aspirin and will see the Cardiologist for a final echo in about another month.

I have my Jakey back. 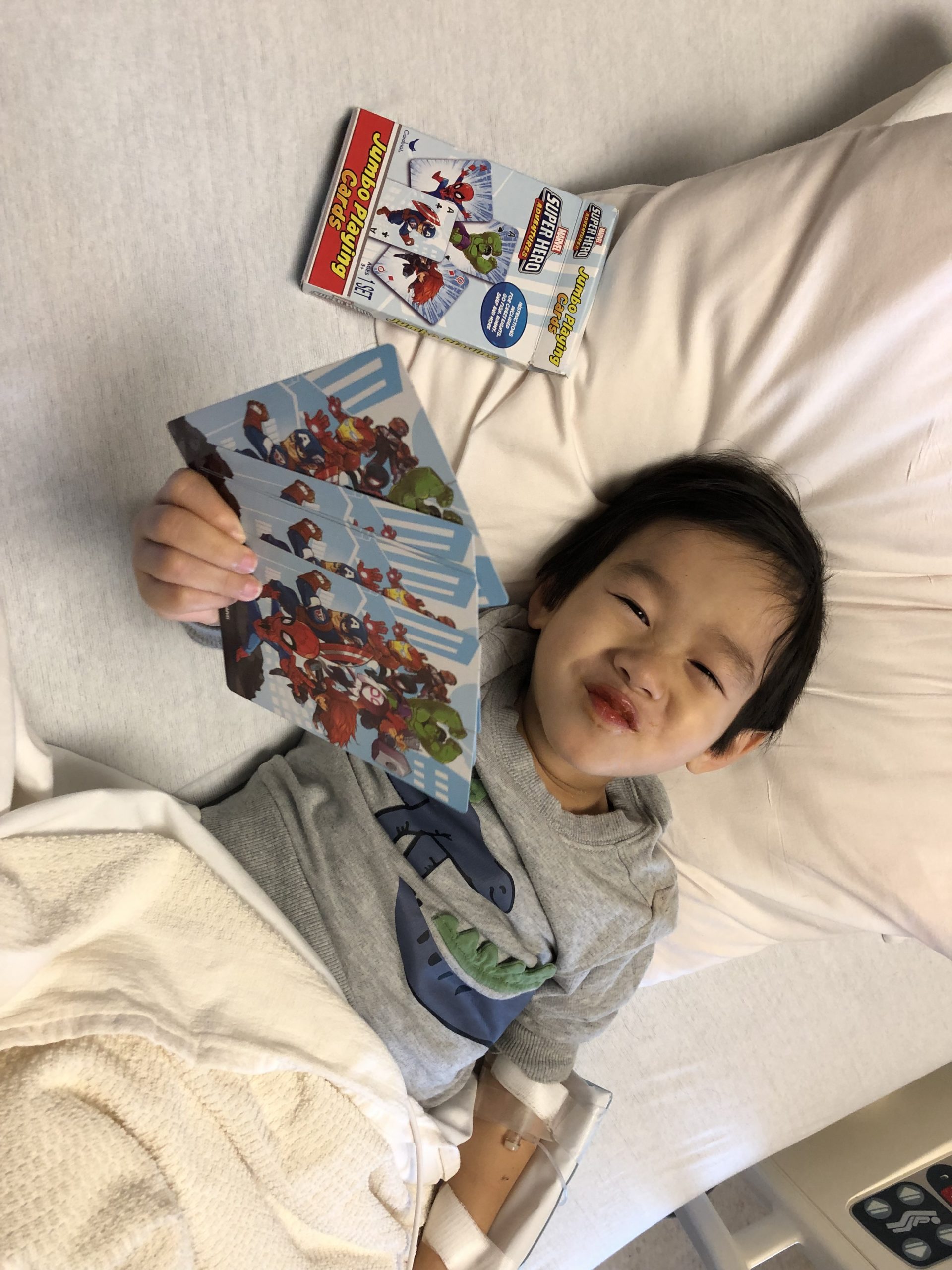