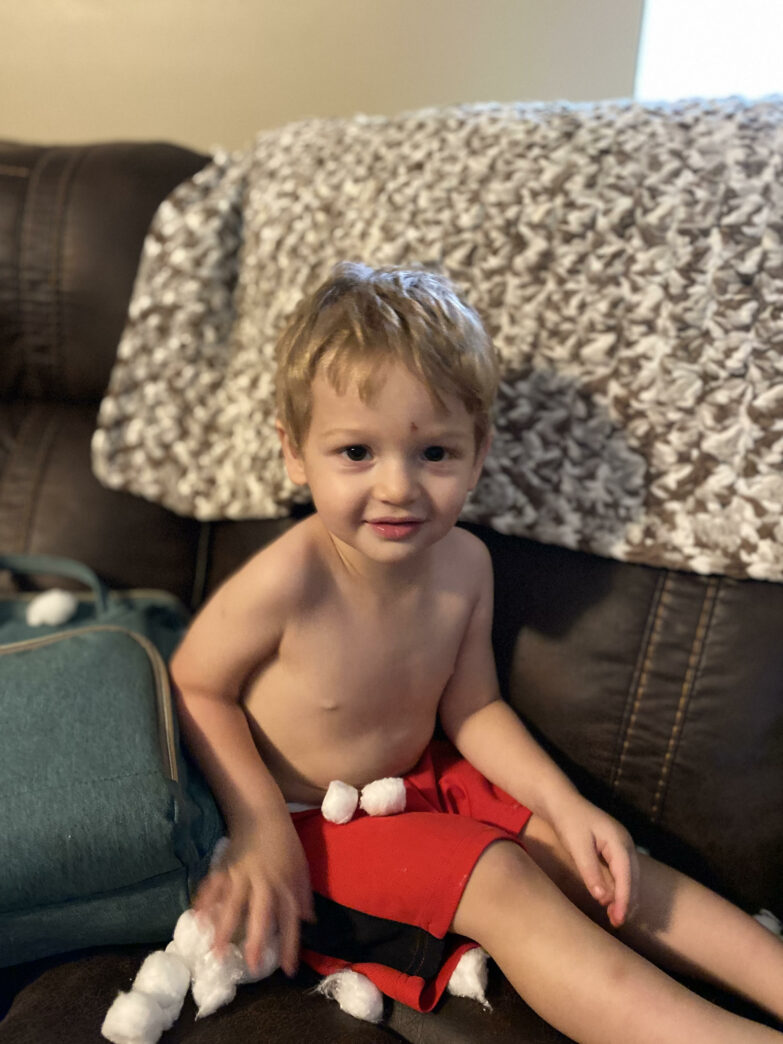 Matthew was 23 month old when he was diagnosed with Kawasaki Disease. Matt is Thing 3 of 4 little monsters and is the daredevil of the bunch. On April 7, 2022 Matt was acting lethargic, irritable, drooling massively and rocking a temp. After making him an appointment with our pediatrician he was diagnosed with strep. Typical diagnosis with all the typical symptoms and antibiotics. April 8, Matt was becoming more irritable, couldn’t swallow his medications and the drool just kept coming. After failing his second dose of antibiotics and not drinking from his cup, I noticed the lymph nodes on the left side of his neck were pretty large. Again, typical for fighting infection. I mention Matthew not drinking from his sippy cup because this baby will drink 10-12 regular sippy cups of milk/juice/water a day with excellent, flooding output. At this point the output was minimal. Later that evening, after waking from a late nap, the lymph nodes on the left side of Matt’s neck were the size of a baseball and now had a 102.8 fever. I called his dad and immediately took him to the emergency room in Miramar Beach Florida, near our home. After receiving IV fluids for dehydration, antibiotics, CT of the neck and examined by several ER doctors, at 2 a.m. we were sent by ambulance to Sacred Heart Hospital Pediatrics in Pensacola Florida with a parapharyngeal abscess in the back of Matt’s throat. There we started IV clindamycin. Upon further investigation by the ENT specialist, the abscess was down graded to a retropharyngeal abscess followed by another CT of the neck to determine if surgery would be necessary. During this time, Matthew continued to spike fevers, Clindamycin was not working and the inflamed lymph nodes had developed into very red and very hot area under his ear and had begun to spread under the chin. At this point, physicians weren’t sure exactly what the redness was since the current antibiotic wasn’t working. We learned Matt was switched to Unyson to continue to fight the infection but the abscess was not sever enough for surgery and would clear. After another day or two of no change in temp and redness under the chin continued to spread, Matthew was diagnosed with cellulitis and Vancomycin along with another IV site was added to his current medications of Tylenol, Toradol and probiotics. The idea of Kawasaki Disease was mentioned due to Matthew’s prolonged fever. After 5 days of constant fevers, topping out at 104.8, classic signs of Kawasaki started to make an appearance. Red lips, strawberry tongue, red eyes, rash of the back and torso, swollen hands and feet, irritably and of course, fever. An ECHO was order with another round of labs, loaded dose of Aspirin and plavix. The labs confirmed the diagnosis of Kawasaki Disease and the ECHO revealed a Mitral Valve leak along with a medium size Coronary Aneurysm. IVIG was immediately administered. Cardiology was brought in to explain to situation and how we proceed from this point. Twice a daily injections of Lovenox was ordered with the daily aspirin. Plavix was discontinued. 48 hours and another ECHO later, Matthew was fever free, cellulitis was fading quickly and my rambunctious, full-throttle baby was back. Easter was spent in the hospital so Matthew could continue to be monitored but with the help of two very wonderful grandmothers, the Easter bunny made an appearance and so did all 3 Matthew’s siblings. Matthew was discharged that Tuesday after an 11 day hospital stay. He is currently on a routine Lovenox injection twice daily and 81mg chewable Aspirin, which goes great with M&Ms. His most recent ECHO revealed no change in the aneurysm but the Mitral Valve leak as nonexistent! He will continue his current medication routine with a follow up CT Angiogram at the end of May. The severity of Matthew’s condition was explained to his two older siblings and was kept as basic as possible. They now monitor and stick with him like two guardian angels, who I’m sure get on his nerves! We are so blessed! Knowing Matthew’s prognosis is sever, we are blessed and so grateful he is still here with us and such a fighter. Kawasaki Strong and kicking Kawasaki butt!!

Streptococcus treated with clindamycin and prednisone.

Matthew is no longer receiving Lovenox injections twice daily but plavix once daily. Aspirin is life long with life long visits to the cardiologist. Mitral valve leak has completely reversed! Aneurysm has shrunk minimally. We have another echocardiogram at the end of the month to check progress! 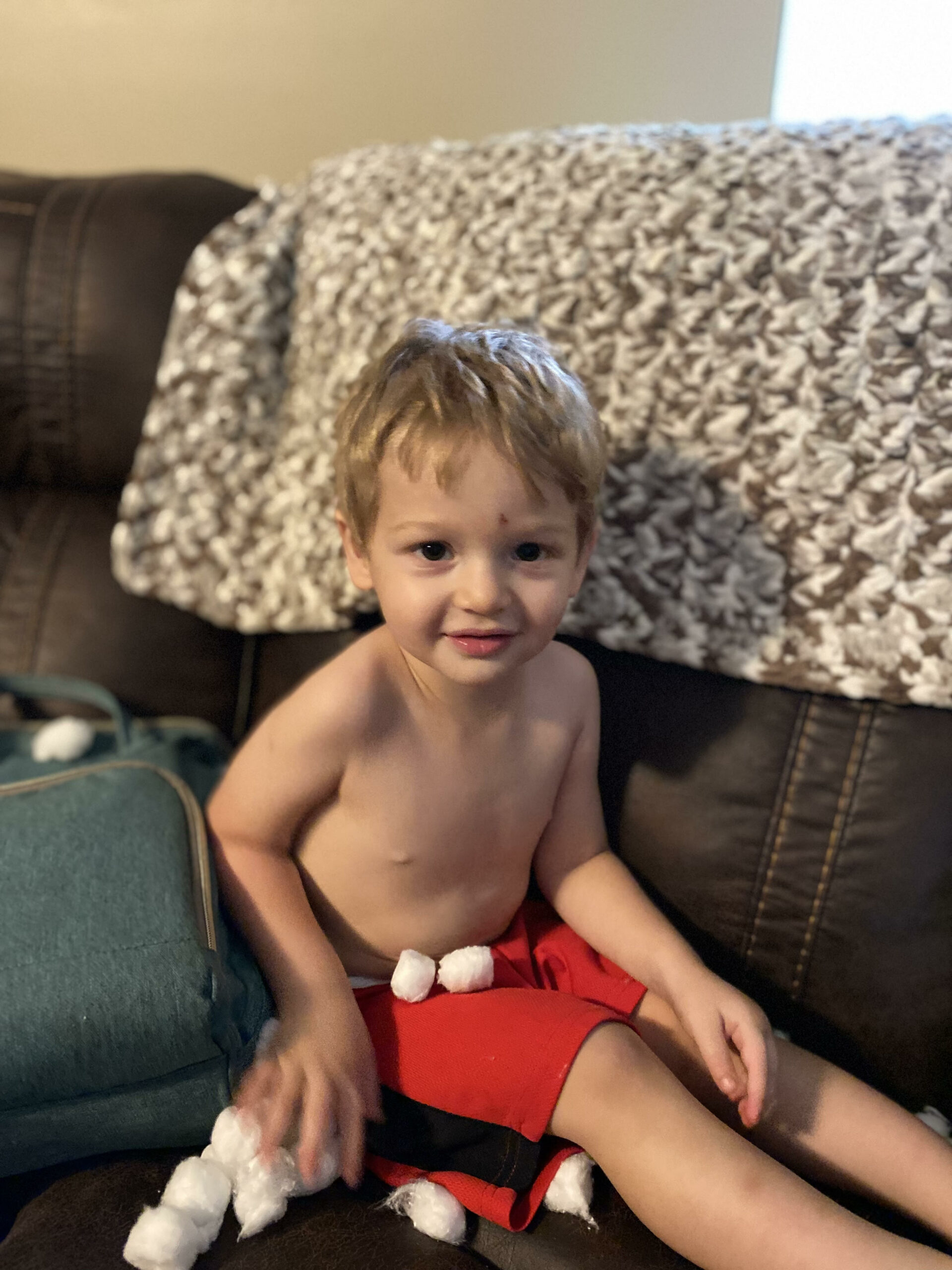