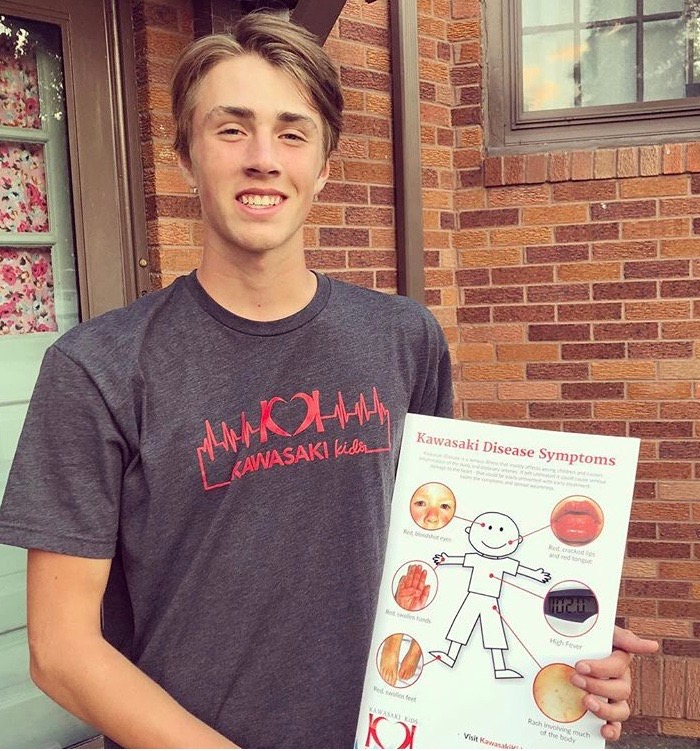 Callen was 11 months old when he became sick with a 105 degree temp. I took him to the Dr but our regular pediatrician was out of town. The Dr we saw said it seemed to be a virus and sent us home. The next day his fever still wasnt breaking and he was starting to look really sick (extremly red eyes and rash on his torso) He had quit crawling and walking due to what appeared to be pain. On the third day I demanded that Dr see him again because now his skin was peeling especially in the groin area. When we got to the office the nurse accused us of "dipping him in scalding water" and she said that is what the peeling skin made her think. Again we were dismissed with a virus and told what to do in case of febrile seizures since he was now on day three of a 105 degree temp. On day four our regular pediatrician returned to town and his regular nurse filled him in on how many times Callen had been in in the prior three days.

Dr Whitney (our pediatrician) then called us at home and asked us to meet him in the ER. He had Callen admitted to the hospital that night and himself and a dermatologist set up in the hallway with a ton of medical books and sat there and went through them. The next morning they brought in a pediatric cardiologist because Dr Whitney at that point was thinking it could be Kawasaki's disease. They treated Callen then with IV immunoglobulin treatments and he dramatically improved. We stayed one more day and then were released. Callen then had joint pain and swelling that set him back with mobility and due to the asprin he was a constant bruise for the next 6 months. We continued to Dr with the pediatric cardiologist but when he retired, no one was certain what to do with Callen. He had a echo and EKG at the age of eight and then we were kinda of told that we should just keep on eye on him but no future appointments were needed. They originally thought he had scarring around his heart but then later said it all looked normal.

Fast forward to our third child being diagnosed with BAV (congenital heart defect) When this happened due to the heredity factor, everyone in the immediate family had to get an Echo. When the cardiologist in Denver found out Callen had Kawasaki disease he took over his care. Callen has had an echo to recheck that everything still looks good and he will have a stress test in this next year. Now we all just wonder if the heredity of the congenital heart defect (which could make Callen more prone to aortic aneurysms) will have any bearing on future issues of Kawasaki's disease. Feels like a waiting game... The older Callen gets we feel lucky but also the bigger his body gets and the more physically active he is the more we worry.

We didn't have a misdiagnosis as much as no diagnosis for awhile. We were asked if we abused him by "dipping him in scalding water" due to the peeling skin in his groin area.

Callen has been very healthy since his treatment. They originally were worried about scarring but have now said everything looks good. Callen's cardiologist has ordered a stress test to be done once he turns 17.

The Kawasaki disease was a very scary time for us and to add to it, Callen has a sibling who was born with a genetic heart condition. The doctors we see said they dont have a Kawasaki patient with a possible genetic factor on top of it, so we are not sure if that will be an added issue for Callen as he ages.