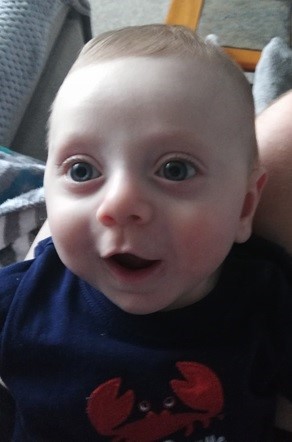 2020 started off as a garbage fire of a year for our family. This was in stark contrast to the best year of my life: the year my firstborn son came into the world.

On Wednesday, January 1, 2020, my wife and I took our 3.5-month-old son to the ER after taking his temperature at home and finding he had a temperature of 102.8°F. The attending physician in the ER took a nasal swab and blood sample to test for viral infections in his respiratory system or bacterial infections in his blood. As the nurses gave him acetaminophen, we waited for the results of the test for a couple hours. When the results came back negative from both the swab and the blood sample, we were sent home without a firm diagnosis (the attending physician said he might have a cold) and with instructions to monitor his temperature and give him baby doses of acetaminophen every six hours.

His fever stayed high the next day and he started getting a rash on his neck, behind his ears, on his stomach, and around his groin. We brought him to our pediatrician, who thought that he might have roseola due to the rash a swollen gland in his neck. We were sent home with ordered to alternate baby doses of ibuprofen and acetaminophen to help comfort him.

With these three disparate diagnoses and a worsening of our son’s condition—coupled with a distant interest in his care that bordered on callousness by the second pediatrician we saw in the clinic—we lost any trust we had in our existing pediatric clinic. (Following the resolution of the Kawasaki disease, this would lead us to finding a new pediatrician that better suited our needs.)

About an hour after giving our son the Benadryl, we took his temperature again: 104°F. This was freak out time for us. On the advice of my wife’s amazing coworker, we rushed to the Primary Children’s Hospital at the University of Utah. As soon as we entered the ER, we felt much better about how we were handling our son’s situation. We got a CAT scan of the lump in his neck (which turned out to be a swollen lymph node) and the nurse and doctors on call started thinking about a diagnosis of Kawasaki disease. We had never heard of it before, but the more we read about it, the more our son’s symptoms started to line up very well with that diagnoses. We desperately wanted the doctors to admit us to the hospital rather than send us home. We weren’t sure we could emotionally handle seeing our son’s condition deteriorate further with no known cause.

Mercifully, we were admitted on Friday night, two days after we first noticed the fever. The next nine days were a blur of tear-soaked emotions with intermitted glimmers of hope. The doctor’s took blood to measure his CRP level, which was very elevated. They performed an echocardiogram and saw that his coronary arteries were slightly dilated. The doctors wanted to wait until Sunday to treat him with IVIG and aspirin as five days of fever is the waiting protocol for treatment for Kawasaki disease. We were told they wanted to wait for five days as that would help rule out other possible causes of his symptoms that would resolve earlier than that. We were also told that treatment outcomes are statistically the same as long as a patient is treated within 10 days of the initial onset of fever.

Since his symptoms all aligned well with Kawasaki disease (i.e., he had a fever over 102.2°F that lasted more than three days, extremely red eyes, a rash covering his body, very red lips and “strawberry” tongue, red hands and feet, and swollen lymph nodes in his neck) he was started on IVIG and aspirin on Sunday night, which was five days after his initial fever. While his symptoms improved over the next two days (although he still had a lot of nasal congestion), his fever did not resolve. The doctors decided to retreat him with IVIG on Wednesday night. By Saturday, his fever had resolved, and we were discharged on Sunday afternoon, nine days after he was admitted.